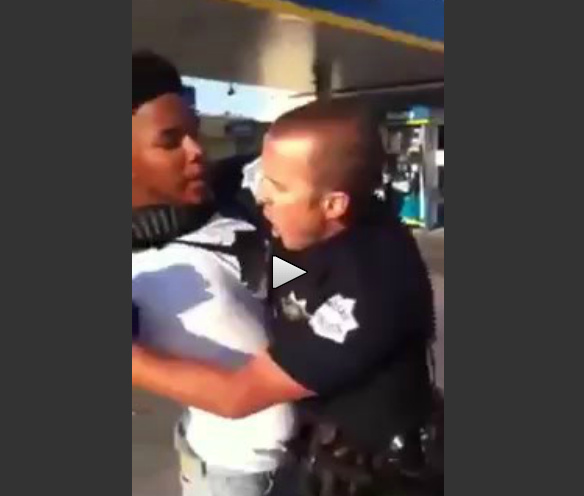 This is the most pathetic video we’ve ever seen. The lack of respect for the law and officers is frightening beyond belief. It’s going to come to a bloody battle between the law and the lawless soon. The guy holding the camera is obviously a moron if he thinks that he did nothing wrong. When a cop tells you to sit down, you sit down. They were obviously doing something out of the ordinary to get the cop in the first place.

Pro-tip: when the cop tells you to comply or get on the ground, you get on the ground. If it’s wrong, you deal with it later. But this is one of the things that Black Lives Matter does, it basically encourages black kids to resist, making them believe if they don’t, they will be killed by the evil police who are out to get them. It also makes police reluctant to act when they should or second guess whether to defend themselves, which is a good way of getting killed.

Fresno, CA – A California cop, who tried to detain a high school student for jaywalking, ended up wrestling with him for more than two minutes as the teen’s friend recorded, landing both of them in jail.

The incident took place Wednesday in Fresno near First and Barstow outside Hoover High School when a student known on Facebook as “KC” tried to cross a street, only for a cop to grab him and accuse him of jaywalking.