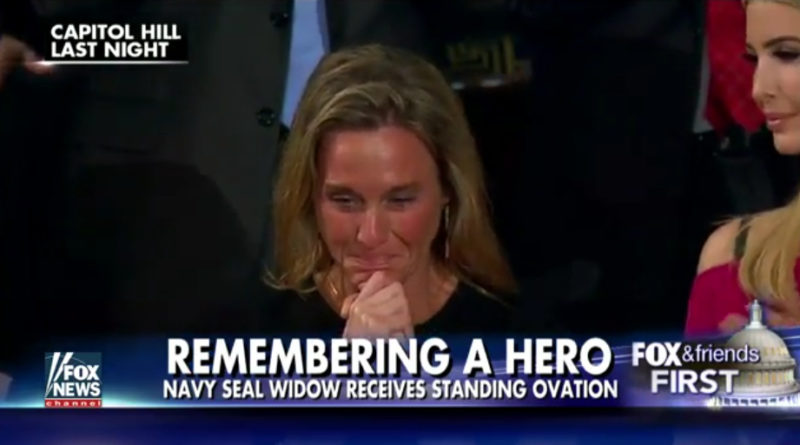 Scumbag. The hatred from the left never ceases to amaze me. The entire world now knows what an insensitive dirtbag he is. How does he explain this to his family and friends?

Hatred from the other side. I would think this is beyond what a human is capable of saying to someone, but it's not! pic.twitter.com/nNVfFWJmDh

A former Hillary Clinton volunteer drew swift condemnation — and lost his job — after mocking the widow of a fallen Navy SEAL who was honored by the president during his congressional address Tuesday night.

Dan Grilo, who said in his Twitter profile that he was a former volunteer for both Hillary Clinton and President Barack Obama, made the remarks after Trump paid tribute to Carryn Owens. She is the widow of U.S. Navy SEAL William “Ryan” Owens, who was killed in a counterterrorism raid in Yemen last month.

“Our veterans have delivered for this nation—and now we must deliver for them,” Trump said, eliciting an extended standing ovation from the entire chamber for a visibly emotional Owens.

“Ryan died as he lived: a warrior, and a hero – battling against terrorism and securing our nation,” Trump said.

While widely regarded as the most powerful moment of the night, Grilo was not impressed. Responding to a tweet from L.A. Times reporter Matt Pearce, who noted that Owens was crying and overwhelmed, Grilo tweeted:

“Sorry, Owens’ wife, you’re not helping yourself or your husband’s memory by standing there and clapping like an idiot. Trump just used you.” More