The most disgusting part is that she claims to be part of a noble heritage. So she’s upset that she was called Pocahontas. Would she prefer President Trump just call you what she really is… A liar?

Dear Elizabeth, If you’re going to make up being a minority, you should probably first make sure your real ancestors didn’t commit horrific acts against that said minority.

Not only is Elizabeth Warren lying about her Native American heritage, but it turns out one of the lawmaker’s ancestors rounded up Cherokees during the horrific Trail of Tears. 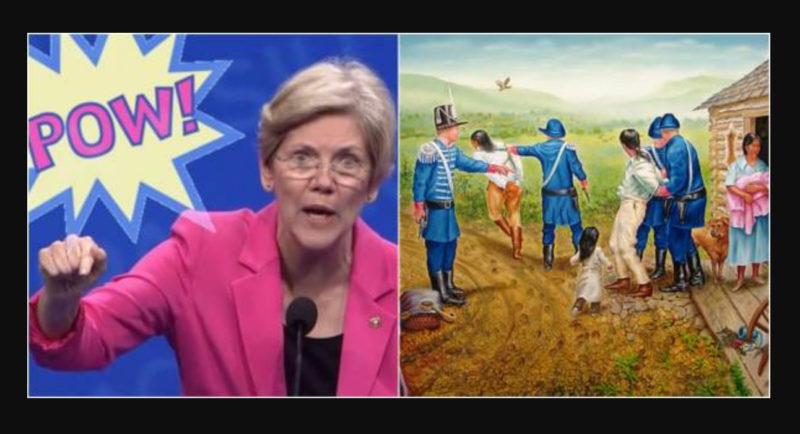 Breitbart News reports: As I pointed out in my article here on Sunday, no evidence supports this claim. O.C. Sarah Smith Crawford had no Cherokee heritage, was listed as “white” in the Census of 1860, and was most likely half Swedish and half English, Scottish, or German, or some combination thereof. (Note, the actual 1894 marriage license makes no claim of Cherokee ancestry.)

But the most stunning discovery about the life of O.C. Sarah Smith Crawford is that her husband, Ms. Warren’s great-great-great grandfather, was apparently a member of the Tennessee Militia who rounded up Cherokees from their family homes in the Southeastern United States and herded them into government-built stockades in what was then called Ross’s Landing (now Chattanooga), Tennessee–the point of origin for the horrific Trail of Tears, which began in January, 1837. […]

These were the troops responsible for removing Cherokee families from homes they had lived in for generations in the three states that the Cherokee Nations had considered their homelands for centuries: Georgia, North Carolina, and Tennessee.

While these involuntary home removals were not characterized by widespread violence, the newly displaced Cherokee mothers, fathers, and children found an oppressive and sometimes brutal welcome when they finally arrived at the hastily constructed containment areas. An estimated 4,000 Cherokees were warehoused in Ross’s Landing stockades for months awaiting supplies and additional armed guards the Federal Government believed necessary to relocate them on foot to Oklahoma.

Warren is in the news this week after President Trump joked about the lawmaker’s fake Native American heritage, referring to her as Pocahontas, during a honoring Native American Code Talkers.

“You were here long before any of us were here. Although we have a representative in Congress who they say was here a long time ago. They call her Pocahontas,” Trump said.

Here’s the video: Trump calls Elizabeth Warren ‘Pocahontas’ while honoring Native American code talkers: “You were here long before any of us were here. Although we have a representative in Congress who they say was here a long time ago. They call her Pocahontas.” pic.twitter.com/hjZ5MInDDf

Shocking nobody, Warren responded to the jab by calling President Trump’s joke a racist slur during an appearance on MSNBC.

“It is deeply unfortunate that the President of the United States cannot even make it through a ceremony honoring these heroes without having to throw out a racial slur.” pic.twitter.com/au1QntxDzR

“It is deeply unfortunate that the President of the United States cannot even make it through a ceremony honoring these heroes without having to throw out a racial slur,” said Warren.

Of course, Warren took the opportunity to fundraise off the joke.

“Predictably Warren is out with a fundraising email on Trump’s comments,” tweeted AP’s Zeke Miller.

Predictably Warren is out with a fundraising email on Trump’s comments pic.twitter.com/LxGlTt2ZEr

Warren should be forced to walk the “Trail of Tears and re-pay all ill-gotten money from her claiming to be Cherokee.” She Is a liberal liar who is a disgraceful and despicable person.