The fact that no DNC officers where told about the ‘hack’ or about Crowdstrike coming in to investigate for over a month just proves that this was a sham set-up by the Clinton campaign, along with Debbie Wasserman Schultz. It was all a fraud to come up with “evidence” to bolster their fake Russian scandal. Plus they also needed to cover for the leaks. This was just one huge diabolical fraud.

Former DNC interim Chairwoman Donna Brazile lit up the political world on Thursday when she revealed the underbelly of the DNC which included Hillary’s dirty tricks to rig the primary in her favor. 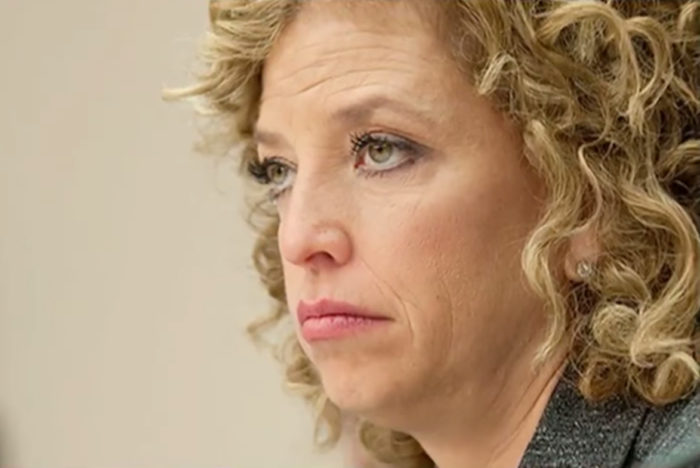 Not only did Brazile throw Hillary under the bus, she exposed Debbie Wasserman Schultz’s horrible management skills and secretive behavior which crippled the lines of communications with DNC officers.

Wasserman Schultz was so secretive that she didn’t even tell any of her fellow DNC officers that the servers had been breached until MINUTES before WaPo broke the news of the hack.

The Saturday morning after the convention in July, I called Gary Gensler, the chief financial officer of Hillary’s campaign. He wasted no words. He told me the Democratic Party was broke and $2 million in debt.

“What?” I screamed. “I am an officer of the party and they’ve been telling us everything is fine and they were raising money with no problems.”

If I didn’t know about this, I assumed that none of the other officers knew about it, either. That was just Debbie’s way. In my experience she didn’t come to the officers of the DNC for advice and counsel. She seemed to make decisions on her own and let us know at the last minute what she had decided, as she had done when she told us about the hacking only minutes before the Washington Post broke the news.

According to a June 2016 WaPo article, Wasserman Schultz immediately consulted with Crowdstrike, rather than law enforcement. This decision was made without fellow DNC officers.

“The security of our system is critical to our operation and to the confidence of the campaigns and state parties we work with,” said Rep. Debbie Wasserman Schultz (Fla.), the DNC chairwoman. “When we discovered the intrusion, we treated this like the serious incident it is and reached out to CrowdStrike immediately. Our team moved as quickly as possible to kick out the intruders and secure our network.”

Chief executive Amy Dacey said she then spoke with Michael Sussmann, a DNC lawyer who is a partner with Perkins Coie in DC–yes the same law firm that paid for the Russia dossier. And we’re supposed to trust Crowdstrike??

According to WaPo, within 24 hours, CrowdStrike had installed software on the DNC’s computers so that it could analyze data that could indicate who had gained access, when and how.

Why on earth didn’t Debbie Wasserman Schultz consult with other high level DNC officers about such a huge breach which ultimately led to the DNC emails being released to the public? Read more at TGP.