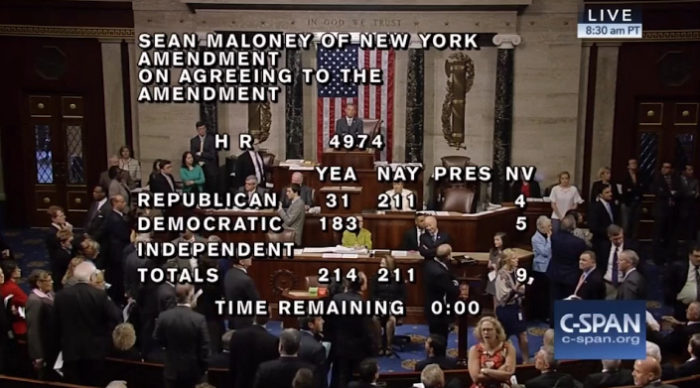 Why are Christians always forced to abide by things against their religion, while Muslims are pandered to?

FNI: House Democrats booed and chanted “shame” at Republicans who switched their votes to defeat a measure meant to protect LGBT rights.

The vote was on an amendment proposed by Rep. Sean Patrick Maloney (D-NY) to strip language out of a defense spending bill that its proponents said would allow government contractors to cite religious liberty in discriminating against employees who are LGBT.

The vote for Maloney’s amendment peaked at 217, one short of the majority needed for passage, before it began a slow, sporadic decline. Members of the Republican whip team, whose job is to round up needed votes, were stalking the House chamber’s aisles where GOP lawmakers seat, openly pleading for support.

Maloney accused Majority Leader Kevin McCarthy of convincing House Republicans to change their votes, claiming that he “went around and twisted everybody else’s arms.”

“They literally snatched discrimination out of the jaws of equality. We won this vote,” he told reporters. More

The HIll: Twenty-nine Republicans voted for Maloney’s amendment to a spending bill for the Department of Veterans Affairs and military construction projects, along with all Democrats in the final roll call.

“This is one of the ugliest episodes I’ve experienced in my three-plus years as a member of this House,” Maloney, who is openly gay, said while offering his amendment.

Denham, Valadao, Poliquin and Young are among the most vulnerable Republicans up for reelection this year. Walden, meanwhile, chairs the House GOP campaign arm.

Poliquin denied opposing the amendment due to pressure from GOP leaders. More