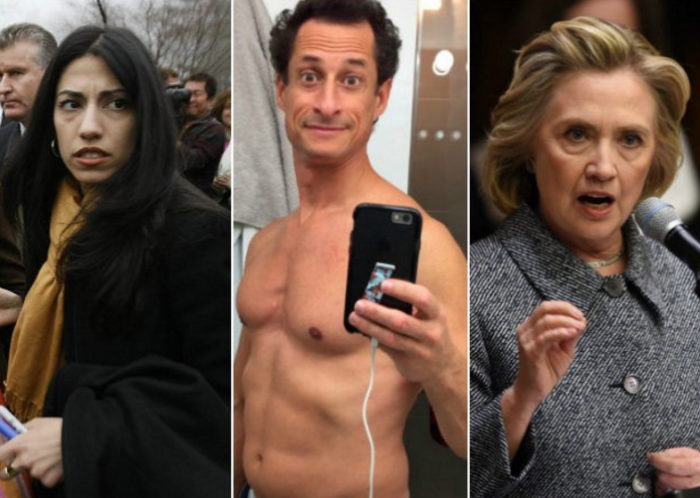 Note also Weiner elected to hand over his electronic tools knowing full well they contained more information about his own activities than what’s already been made public.

His cooperation is coming because he’s in a world of trouble and therefore will have to give up some significant assistance in the Hillary investigation to have a chance of avoiding serious penalties himself.

One can only imagine what kind of relationship Hillary has with her very close top aide’s soon to be ex-husband.

Trending: Seth Rich Attended Party With Numerous DC IT Workers The Night He Was Murdered

Fox News Sunday reported this morning that Anthony Weiner is cooperating with the FBI, which has re-opened (yes, lefties: “re-opened”) the investigation into Hillary Clinton’s classified emails. Watch as Chris Wallace reports the breaking news during the panel segment near the end of the show:

And the news is breaking while we’re on the air. Our colleague Bret Baier has just sent us an e-mail saying he has two sources who say that Anthony Weiner, who also had co-ownership of that laptop with his estranged wife Huma Abedin, is cooperating with the FBI investigation, had given them the laptop, so therefore they didn’t need a warrant to get in to see the contents of said laptop. Pretty interesting development.

Targets of federal investigations will often cooperate, hoping that they will get consideration from a judge at sentencing. Given Weiner’s well-known penchant for lying, it’s hard to believe that a prosecutor would give Weiner a deal based on an agreement to testify, unless his testimony were very strongly corroborated by hard evidence. But cooperation can take many forms — and, as Wallace indicated on this morning’s show, one of those forms could be signing a consent form to allow investigators to review the contents of devices that they could probably get a warrant for anyway. We’ll see if Weiner’s cooperation extends beyond that. More

MINDSPACE: The “Not For Government Policy” Document That Government Is Using Against The People
June 18th, 2021 Sons of Liberty Media

WATCH: Blatant Liar Stacey Abrams Says ‘No One Ever Objected To Voter I.D.’ — Here She Is Doing EXACTLY That
June 18th, 2021 Clash Daily