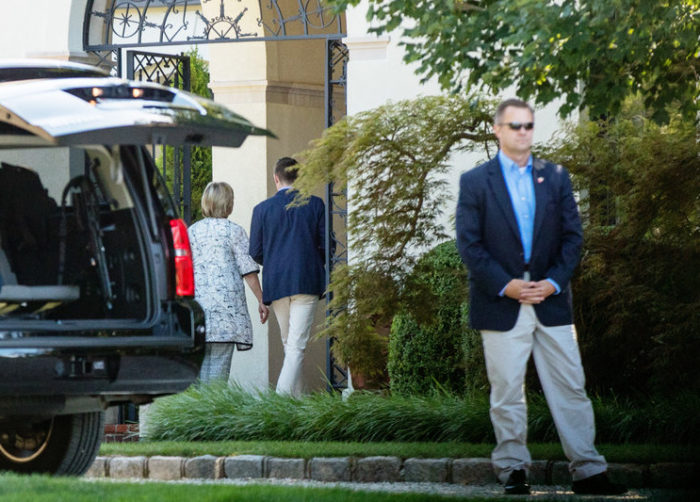 She didn’t go to Louisiana or Mexico but let me tell you if you’ve got the money, she’s got the time honey.

At a private fund-raiser Tuesday night at a waterfront Hamptons estate, Hillary Clinton danced alongside Jimmy Buffett, Jon Bon Jovi and Paul McCartney, and joined in a singalong finale to “Hey Jude.”

“I stand between you and the apocalypse,” a confident Mrs. Clinton declared to laughs, exhibiting a flash of self-awareness and humor to a crowd that included Calvin Klein and Harvey Weinstein and for whom the prospect of a Donald J. Trump presidency is dire.

Mr. Trump has pointed to Mrs. Clinton’s noticeably scant schedule of campaign events this summer to suggest she has been hiding from the public. But Mrs. Clinton has been more than accessible to those who reside in some of the country’s most moneyed enclaves and are willing to spend hundreds of thousands of dollars to see her. In the last two weeks of August, Mrs. Clinton raked in roughly $50 million at 22 fund-raising events, averaging around $150,000 an hour, according to a New York Times tally.

And while Mrs. Clinton has faced criticism for her failure to hold a news conference for months, she has fielded hundreds of questions from the ultrarich in places like the Hamptons, Martha’s Vineyard, Beverly Hills and Silicon Valley.

“It’s the old adage, you go to where the money is,” said Jay S. Jacobs, a prominent New York Democrat.

Video: Sen Hawley Has NO Patience With Energy Sec Talking Points
May 20th, 2022 The Lid