Another Clinton lie… I’m totally shocked, I tell ya!

Former President Bill Clinton made the bad decision to tweet out that no Clinton Foundation funds were used to pay for Chelsea Clinton’s wedding…Oops! The only problem is that there is evidence to the contrary from Wikileaks!

No Clinton Foundation funds—dedicated to Haiti or otherwise—were used to pay for Chelsea’s wedding. It’s not only untrue, it’s a personal insult to me, to Hillary, and to Chelsea and Marc.https://t.co/YEHqqYrsxW

THE LEAKED EMAIL BETWEEN DOUG BAND AND JOHN PODESTA TELLS IT ALL: The email includes a complaint from Band that the Clintons are using Clinton Foundation “resources” to pay for the wedding. Wow! Read more at 100%FedUp. 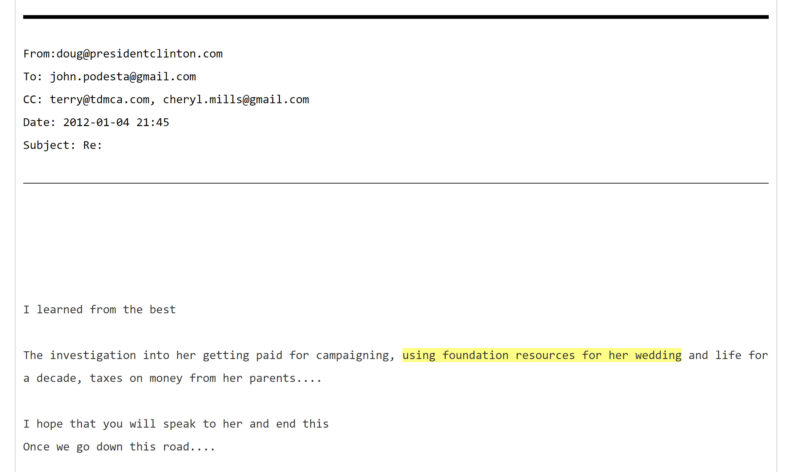 “I did not give funds to that woman Chelsea Clinton.” Sure we believe you Bill! What reasons would we have to think you’re lying?

😂😂😂ok slick Willy, no funds given, how about RESOURCES?

Feel free to read the emails yourself or call Doug Band. pic.twitter.com/Nh534rXc88

We just want to know what the Haiti funds *were* used for. Or why Tony Rodham ended up on the board of a Haitian goldmining company. Or just where the $13 billion went and where we can see it on the ground.

Unfortunately old mate your words have been proved over the years to be worthless – show us the bank statements. It really is that easy.

Nice try Billy, but we know the truth!!

Here's Why Liberal California Is The Poverty Capital Of America