If things like the confederate flag offend you maybe you should just move on and not act like a whiny crybaby. Just another SJW looking for her 15 minutes. This woman needs professional help, not publicity. Should someone call CPS, because she’s the one traumatizing the
children?

Of course, the store caved to her demands… the manager removed the rugs and fired the employees involved. 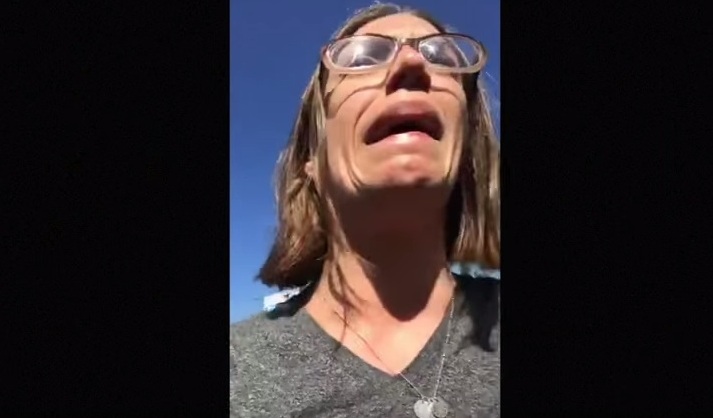 Meanwhile, the store that stocked the Confederate flag rug has removed it, apologized & put the employees involved on indefinite leave. pic.twitter.com/3WOJS3PLE1

PJMedia: If you’re going to fake a hate crime and, make sure you don’t do the following things:

1. Do not angrily confront anyone with children in tow
Franklin claims to be terrified of these men and yet she aggressively confronts them and films them while hurling insults at them. She thinks they are “racists” and people who support “hate symbols,” which leads one to believe she also thinks they are capable of great violence. Would you provoke violent racists while you have your children with you? I wouldn’t. So either she’s incredibly stupid or she knows these men aren’t dangerous at all and what she is doing is meant to intimidate and shame them. (Let’s also acknowledge that it can’t possibly be good for children to hear their mother sobbing and freaking out while she does absolutely nothing to reassure them. It’s hard to watch.)

2. Don’t lie about things that are verifiably untrue
When faking a hate hoax, make sure you edit out the parts of the video that prove you’re a liar. She lied about several things. First, she lied about the Confederate flags “hanging on the wall.” You’ll notice that in the video you can’t see any flags. That’s because there weren’t any on the wall like Franklin claimed. She might have gotten away with it if she hadn’t taken a picture of the flags and posted them on her Facebook page for anyone to see. Here is the “flag” she claims was displayed on the wall:

It’s not a flag and it is not hanging on the wall. It’s a rug that is hanging in a rug rack with other rugs and it’s buried in the middle where she would have had to dig through them to find it. Then she lied about what the men said to her. We can clearly hear the man call her a “bit*h.” But when she describes what happens to her to a bystander, she decides to make it sound worse by saying he called her a “f***ing bit*h.” She also adds that they followed her around, which also doesn’t appear true when watching the video she made.

Then she lies about the man in the parking lot “approaching” her! Clearly, the man is filming her from about 50 feet away while standing absolutely still. He only moves once—when she dares him not to come any closer—and sarcastically takes one giant step forward like he’s playing Simon Says. It’s hilarious. This triggers the next mentally unstable reaction from the SJW.

3. If you can’t muster real tears, don’t bother
Her out-of-control response and fake crying are Razzie-worthy. She’s so “terrified” and scared for her life that she remembers to turn the camera around so we can all see her dry cheeks as she wails uncontrollably at an ear-splitting frequency. Then, when a good Samaritan comes over to assist her, she continues her bad acting and fake sobbing while her nose grows on camera as she starts recounting a bunch of stuff that didn’t happen, proving once again that SJWs always lie. More