The entitled arrogance of the Swamp on full display for the world to see. I’m sorry, but when you immediately blame racism for everything that happens to you that’s called paranoia and insecurity, not racism.

The woman Rep. Sheila Jackson Lee (D-TX) accused of being a racist in an argument over an airplane seat, is purportedly a “celebrated photojournalist” who has worked extensively in documenting human-rights abuse throughout her career. 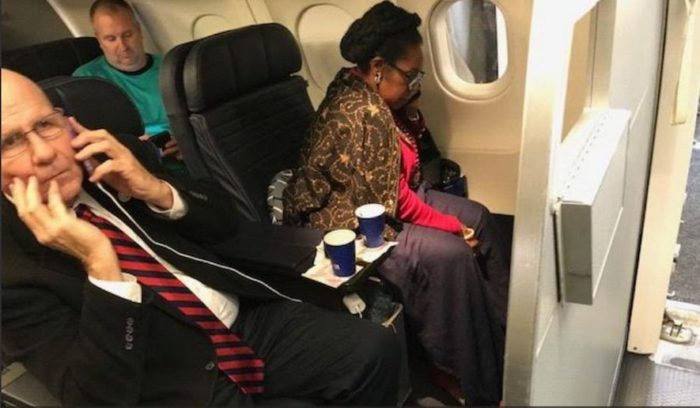 Jean-Marie Simon, the woman whose first-class seat on United Airlines was given to Jackson Lee, helped document human-rights violations in Guatemala during the 1980s when the country’s military overthrew the government — a period that saw hundreds-of-thousands of Guatemalans disappear or be killed, The Washington Times reported.

Jackson Lee accused Simon on Tuesday of being upset that her seat was taken away from her because “I was an African American woman.”

I noted that this individual came toward me and took a picture. I heard later that she might have said “I know who she is.” Since this was not any fault of mine, the way the individual continued to act appeared to be, upon reflection, because I was an African American woman,

The controversy began last week when Simon, 63, wrote in a Facebook post that the airline gave her first-class seat to Jackson Lee while she was on a return trip from Guatemala.

“I was the last passenger on the plane,” Ms. Simon wrote on Facebook. “A Texas congressman, a nice guy, sat down next to me. He said was glad I had made it on the flight. I showed him my boarding pass with my seat, 1A, printed on it. He said, ‘You know what happened, right? Do you know who’s in your seat?’ I said no. He told me that it was Jackson Lee, a fellow U.S. congresswoman who regularly does this, that this was the third time he personally had watched her bump a passenger.”

United reportedly apologized for the incident and gave Simon a $500 travel voucher — despite previously saying that it did nothing wrong and that Simon canceled her own airline ticket. Read more at TDW.

United has NOT apologized to me. On Dec. 23, a low level employee at call center said he was sorry on phone. Voucher I received was United’s idea of compensation for cancelling my flight and given it to Ms. Jackson Lee. Please correct your story. @sfchronicle @united @AP

AP/Houston bureau called: I asked them to correct their “United apology” story: United has not apologized. If it has, where’s the letter? And the $500 voucher was given before I complained as “take the voucher and get on plane or find another flight or airline.: @AP @United

NBC reporter told me tonight that United had restored my miles. United never contacted me, so I heard it from media. If United can restore my miles, can it “cancel” my reservation too? And no apology in today’s mail; I’m surprised and concerned. pic.twitter.com/RaVut4EWXq

Isn’t this the same Sheila Jackson Lee who constantly espouses that Trump is a spoiled brat, and out of touch with the average American?! Maybe she should take a look in the mirror!