Ouch! This is why we love James Woods so much! The liberals don’t care about those kids. The MSM got their marching orders to scream about ripping children from their mothers in order to distract people from the IG’s report and the hearings that are currently taking place. Next week they will be screaming about something new.

Hillary unleashed a Twitter rant Monday showing faux outrage over an immigration policy that separates illegal alien children from their ‘parents’ at the border. 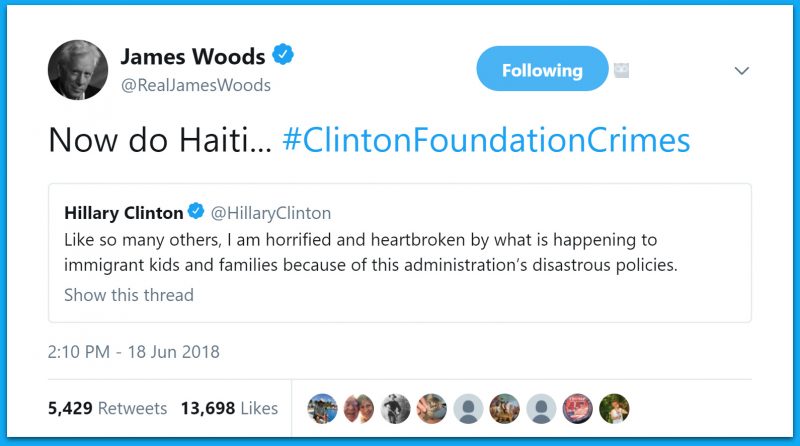 TGP: Hillary Clinton has no room to talk; she should sit this one out.

Hillary Clinton, one of the most corrupt, criminal liars to ever hold public office in this country had the nerve to cite a Bible verse and beg for money from her Twitter account to fight against current immigration laws that separate illegal alien children from ‘parents’ at the border.

This exact law was in place during the Obama years, but now since Trump is president, it is suddenly a humanitarian crisis and Republicans are evil for allowing it to happen.

We have no definitive proof the children are even related to the adults they show up with at the border which only encourages child trafficking.

In fact, Saagar Enjeti from The Daily Caller reports, “single males with ‘children’ are increasingly arriving. Neither the child nor the adult can answer basic questions about each other, authorities suspect rampant fraud.”

Hillary Clinton tweeted: Like so many others, I am horrified and heartbroken by what is happening to immigrant kids and families because of this administration’s disastrous policies.

Like so many others, I am horrified and heartbroken by what is happening to immigrant kids and families because of this administration’s disastrous policies.

James Woods had the perfect response and moved in with a kill shot.