She hit back hard when a friend who told her she only got into Yale med school because of her ‘white privilege.’ She revealed that she actually grew up in a foster home after her alcoholic parents gave her and her brother up when she was only five.

When someone uses the term “white privilege” to undermine your accomplishments, they’re just saying that they are racist under a veiled statement. 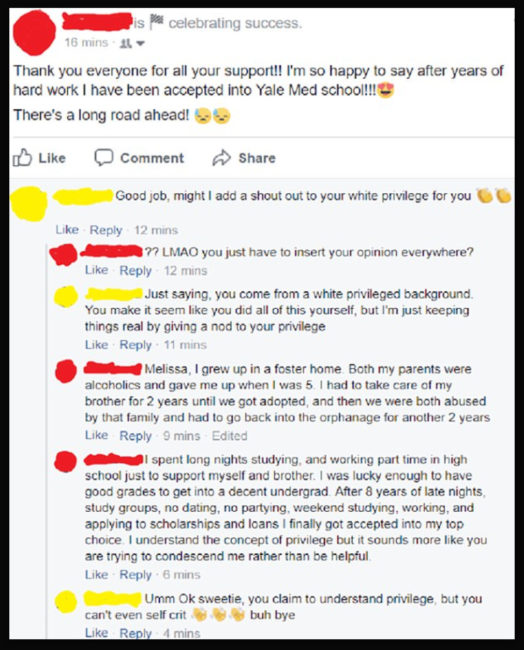 Fox News: A student accepted to Yale University who posted her big news on Facebook wasn’t congratulated — but shamed, for what one critic called her “white privilege.”

In a Facebook post cited by the Daily Mail, an unnamed user wrote about her acceptance into the Yale School of Medicine. It wasn’t long before another user, named “Melissa,” said Yale accepted the future student because of her “white privilege.”

“Good job, might I add a shout out to your white privilege for you,” Melissa wrote.

A back-and-forth ensued on Facebook, with Melissa claiming that the future Yale student was accepted because she comes “from a white privileged background. You make it seem like you did all this yourself, but I’m just keeping things real by giving a nod to your privilege.”

But the student who got into the Ivy League school explained that she grew up in foster care after her alcoholic parents gave her up when she was 5 years old. She continued: “I had to take care of my brother for 2 years until we got adopted, and then we were both abused by that family and had to go back into the orphanage for another 2 years.”

“I spent long nights studying, and working part time in high school just to support myself and brother. I was lucky enough to have good grades to get into a decent undergrad,” the student wrote, according to the Daily Mail. She detailed the “8 years” she spent working hard to get accepted into college. More