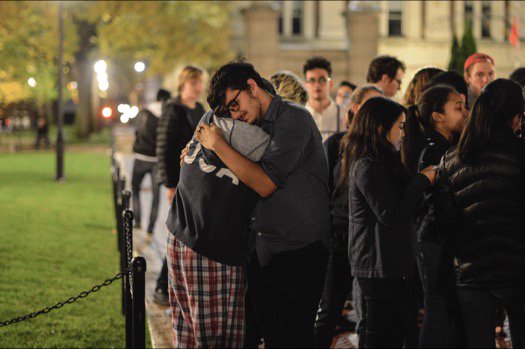 What is this Yale professor teaching these student by making their exam optional because they are upset by the election results?

Liberal students across the nation watched in shock as Donald Trump clinched victory from Hillary Clinton to become the 45th president of the United States.

But some wiped their tears, and pulled themselves together enough to ask their professors to cancel their exams because they were so upset by the results.

And one Yale economics professor heard the cry, and decided to protect his snowflake charges by making the test optional.

He wrote to them saying: “I am getting many heartfelt notes from students who are in shock over the election returns” and “fear, rightly or wrongly for their families” and are “requesting that the exam be postponed.”

It isn’t clear who the professor was, but Yale publishes a list of its economics faculty members here.

John Victor, editor of the Yale News, published the extraordinary message, and noted that many more snowflake students were demanding similar treatment:

The professor, in charge of the Econ 115 “introductory microeconomics” unit, acknowledges that many students sacrificed their time preparing for it, and were welcome to take it anyway.

But he said that said anybody who could not face going it that day could skip it with no consequences.

Apparently not everybody was so lucky, though:

Meanwhile, BIO 114 will have a midterm tomorrow, despite pleas from students to cancel it in light of the election’s “emotional toll:” pic.twitter.com/5XMPPlea0Z